[ Update:  I’ve just been called a “turncoat” on Facebook for supporting England.   Good grief – the language of the 17th century as well as  17th century attitudes]

“I think I’m becoming English”, a friend said to me at the weekend.

Now that’s a thing you don’t hear every day. I suppose in my 68 years I’ve heard the occasional drunk and depressed friend wondering if he was going gay, or listened to people bewildered with their new sympathy towards some extremist group – but changing nationality? That’s a new one.

Except that it wasn’t really new to me. I have been feeling the same recently, and I knew exactly what he was saying…

I’m like any other Scotsman; in the past I too have been in the camp that supports England’s opponents, for its just what you learn when you’re young. My father always followed Test cricket played in England, and always supported the touring side – this despite having been stationed at Dover during World War 2 and presumably having made many English friends there. Yet underneath it all, there was never any real hostility from me towards England – and for 40+ years I’ve happily supported the English test team no matter who they might be up against.

So why am I now so dismayed with the “Anyone but England” brigade? Why am I sometimes ashamed to be Scottish and feel more comfortable with English company than with the ABE crowd? Quite simply the nastiness of it all. What in my case was a chance to wind up English friends in the pub has now turned into genuine hate and hostility, undiscouraged by the SNP. Perhaps their politicians still feel that it is banter; perhaps they do not want to offend their foot-soldiers; perhaps they are secretly happy for this hysterical nationalism to grow. I don’t know; but what I do know is that there is a serious ugliness in Scottish politics now, and it can be violent and oafish.

Here is what passes for humour in Scotland today. 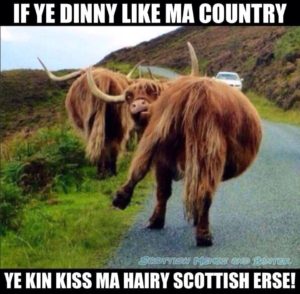 Well, that’s really going to impress non-Scots, isn’t it? OK, it might be just a vulgar joke going round Facebook, but it’s an example of the attitude that a lot of Scotnats have now – and it’s bad one. You want to reinforce the modern stereotype of Scots as moronic. drunken louts? Fine, let’s tell everyone “I’m Scottish – kiss my hairy arse”.

Here are two more, actively gloating in their hope that England will fail (the predictions look a bit silly now) 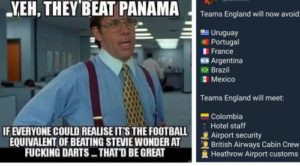 And finally Kevin Maguire making a total fool of himself on Twitter. Experienced journalists should be above this nonsense; I’d suggest too that experienced journalists anyone with half a brain should know that gloating over a defeat before the game is even played (Maguire was referring to the Colombia match) is asking for trouble.

I don’t like this atmosphere and this cocky aggression, for it’s mean and hateful. It is the attitude of a different era. It is most certainly not what 21st century Scotland should be projecting to the world, and I’ve had enough of it. The England-haters can shout and snarl all they want, but I won’t have any part of this infantile abuse.

Nor am I the only one. Four friends of mine now speak out both on Facebook and in the pub against the England-haters, and there must be a huge number of other Scots who have had enough of it too.

I’m hardly at the stage of changing my nationality, but I’ll be cheering on England tonight – and why not. I hope they go all the way.

This is the website for Channel 67, the UK section of the Internet Chess Club. The site is a private venture, and was not commissioned by ICC; nor is it controlled by ICC.

Any queries or comments: please message TheBishop or email tb@ch67.com.

All contributions are welcome, so if you would like to write a blog entry or make any other contribution, then please email TheBishop.